A review of "wing-clapping" in European Nightjars

Abstract The "wing-clapping" noise given by displaying male European Nightjars Caprimulgus europaeus is generally considered to be generated by the primary tips being struck together in flight. However, observations and audio recordings suggest this might not be the case. Rather, there is evidence in favour of the sound being generated by a "whiplash-like" mechanism. Here, we review the evidence supporting this theory, both from the literature and from our own observations and recordings.

The mechanical "cracking" sounds generated by wing movements in displaying male European Nightjars Caprimulgus europaeus is well documented (e.g. Cramp et al. 1985, Holyoak 2001) and is generally termed "wing-clapping", on the basis that the sound is said to be produced by the bird striking the wing-tips together. This explanation was challenged many years ago by Coward (1928) based on his theoretical considerations. Coward likened the sound to that of "the cracking of a whip-lash" generated as "the wings are thrown sharply upwards and at once brought down with considerable speed and muscular strength". He argued that for the soft feathers to be struck together to produce such a sound seemed, to him, impossible. Coward provided no observational evidence of his own to support this hypothesis but the theory was supported by Whittaker (1928), who wrote: "Watching [European Nightjars] from only a few yards distance, I discovered that in making the peculiar cracking noise with the wings - the so-called "wing-clapping" - the wings did not actually meet, neither as they were thrown upwards nor downwards; thanks to the comparatively good light and the fact that the birds were silhouetted against the sky I saw this quite clearly and without any suggestion of doubt."Guggisberg (1941) subsequently reported his own similar observations in support of Coward and Whittaker. 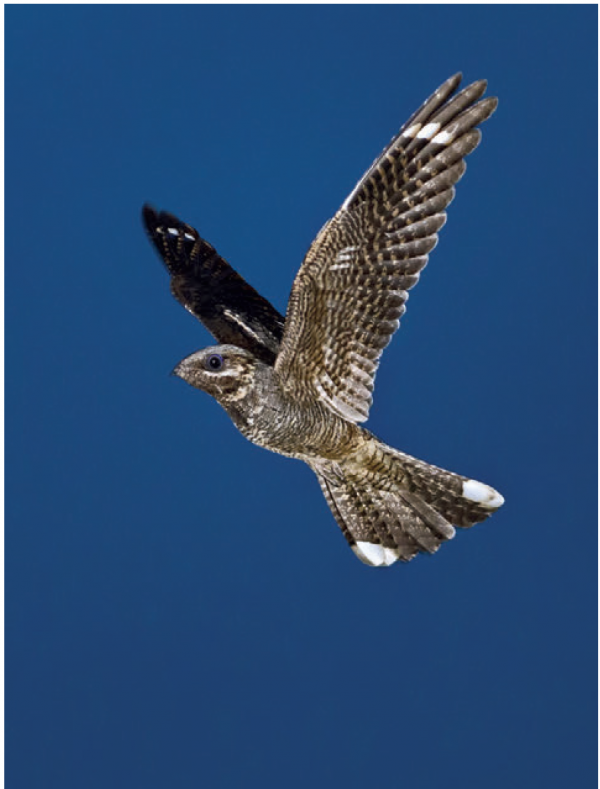 Despite the conviction shown by Whittaker and Guggisberg in their observations, many observers have continued to attribute the sound to the striking together of the wing-tips, although doubts about the validity of that traditional explanation have continued to be aired. Reporting on the observation of wing-clapping in the territorial and courtship display of two North American species, the Chuck-will"s-widow Antrostomus carolinensis and the Common Poorwill Phalaenoptilus nuttallii, Mengel et al. (1972) discussed the uncertainty, referencing Coward, Whittaker and Guggisberg as supporting the one hypothesis and noting that others favoured the traditional view of wing-tip contact. Mengel et al. commented that they "each have independently "seen" birds wing-clapping, yet none of us is actually sure what he "saw"." They suggested that these arguments would be resolved only with stroboscopic photography.

Burnier (1979) described observing a male European Nightjar that "was able to produce the snap sound by giving both wings a sharp blow downwards, following a brief glide, like flapping a whip or a flag", in accordance with Coward"s hypothesis. Making reference to the views of others that the two wings are struck against each other above the body, he concluded that most likely the two mechanisms were employed. Cramp (1985) cites Coward, Guggisberg and Burnier but is non-committal on the subject, stating that the sound is "produced by striking wings together over back or by sudden simultaneous upward or downward motion of both wings." Holyoak (2001) commented further on the controversy in the literature regarding the mode of production of the sharp snapping or cracking sounds, noting that "some observers are convinced that the wings are smacked together to make contact above or below the bird"s body whilst others are equally convinced the sound is produced without the wings being brought into contact, in a manner analogous to the mode of sound production when a whip is cracked."

A photograph by Tim Melling (2017; plate 437) shows what the photographer identified as "the moment of the wing clap". He goes on to state that he "had always thought it was the primary feathers that cracked together but this photograph shows that the wings are bent and it is the [carpals] that make the noise." Whether or not this still photograph can provide any definitive evidence to resolve the uncertainty is not clear, but it nonetheless indicated that generation of the sound was apparently not dependent upon contact between the primaries of the two wings. 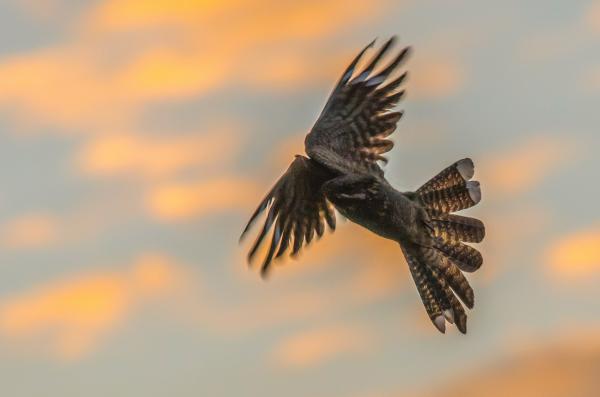 A number of our own visual observations, supported by audio evidence, provide further support for the theory that the primaries are not brought together during the wing "clap". Initial observations were made on 20th May 2020 at a site in Derbyshire between 21.25 and 21.30 hrs. Sunset was at 21.05 hrs and the evening was clear and cloudless. Birds were seen in silhouette against a bright sky, flying directly away from the observers and multiple observations of the wing-clapping birds were made. One male raised both wings high above its body but the wings did not touch each other. Clear sky could be seen between the raised wings at all times. The "clap" appeared coincident with when the wings started to descend from their highest point but this timing was difficult to judge precisely, given the speed of the event. The bird wing-clapped several times as it flew away and the same observation was made during each clap.

This overall sequence was repeated later in the evening. We were standing immediately adjacent to one another during these sightings and both agree on the above description: the wing-clap sound was generated whilst the wing-tips were clearly separated from one another, as demonstrated by clear sky being visible between the wings at all times during the visual observation of the wing-clap events.

The conclusions to be drawn from these visual observations are that the wing-clap sound is made by some flick of the wings that does not involve direct contact of the primaries, in accordance with the much earlier observation reported by Whittaker (1928). The misperception of others that some contact is involved can best be attributed to the poor visual conditions in which observations of this nocturnal species are typically made and the infrequency with which conditions allow for the true nature of the event to be seen. It appears that this misperception may be reinforced by the continued use of the term "wing-clapping" to describe the behaviour.

A waveform was generated from the Derbyshire sound recording, in which 14 separate "wing claps" were identified (fig. 1). The whole sequence of recorded wing-clapping lasted for just under 10 s with a gap of between 0.21 and 3.66 s between each clap. In seven of these 14 claps, a double peak was clearly discernible in the waveform, with a time interval between these two peaks of between 4.9 and 23.2 ms. The relative magnitudes of the first and second peak varied between claps, with the first peak stronger in five out of seven claps and the second peak stronger in one clap. In one clap, the two peaks were equal. The magnitudes of each peak displayed an apparent approximate exponential decay with time with a decay half-life of the order of 1 ms. 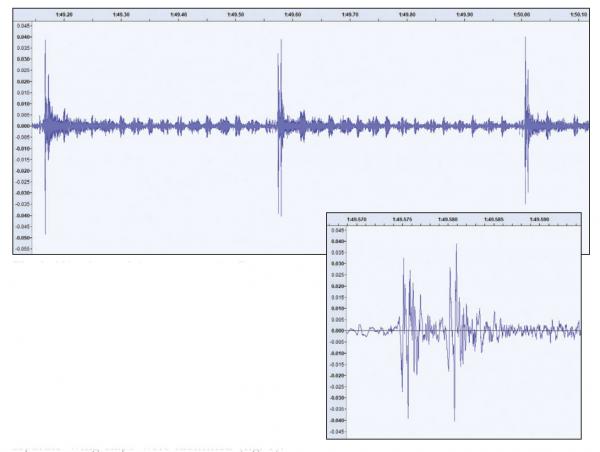 Similar characteristics were identified during a wider review of waveforms of European Nightjars accessible on Xeno-canto but the clarity with which double beats could be identified was found to be variable. Double beats were evident in 70% of recordings from a sample of 20 individuals.

A review of recordings of Red-necked Nightjars C. ruficollis provided a similar picture, with a strong tendency for each clap to show two peaks on the waveform, with an interval of around 14 ms between the first and second peak.

We postulate that a "wing clap" involving contact between the primaries of the two wings should involve a single clap. In contrast, the whiplash sound generation mechanism may involve two separate sounds, one associated with each wing. The waveform observation of double peaks in the wing claps of nightjars supports the visual observation that some mechanism of sound generation from each wing independently applies.

The lack of two clear beats in some recordings is not inconsistent with the whiplash mechanism and can readily be explained by either of two phenomena that are generally consistent with the observation of two beats in other recordings. Firstly, where they can be clearly resolved in the waveforms, the delay time between beats is highly variable. This suggests the possibility of overlap precluding the differentiation of two beats where the delay between beats is sufficiently short. Secondly, the relative intensity of the two beats is highly variable in those cases where they can be clearly resolved in the waveform. This suggests the possibility of one of the beats being too weak to be visible in some recordings, perhaps linked to the skill of an individual in being able to successfully generate the sound using both wings.

The European Nightjar and Red-necked Nightjar wing claps are very similar, both to the human ear and when viewed in waveform, indicating that the two species use essentially the same sound generation mechanism. Other nightjar species that we have found to produce a similar wing-clap sound with a double peak based on recordings from Xeno-canto are the Philippine Nightjar C. manillensis, the Plain Nightjar C. inornatus and the Sickle-winged Nightjar Eleothreptus anomalus.

The exact mechanism by which the sound may be generated by a flick of the wings remains uncertain. The sound of a whiplash, in the technical sense of the word, is a specific phenomenon that seems to us unlikely to apply to the wing clap - but we presume that Coward (1928) made reference to this as a broad analogy rather than suggesting a close mechanical similarity. Clay et al. (2000) comment on the modified shape of the wings and in particular the outer primaries of various New World nightjars, the detail of which differs slightly between species, suggesting that these features might function in the production of mechanical noises. They pointed out that some nightjar species have a very rough, almost serrated edge to the distal inner-web of the outer primaries (plate 438) and concluded that this may suggest a function in the production of mechanical noises. 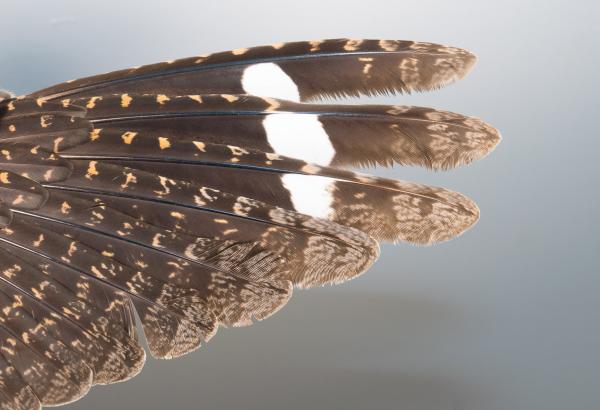 Whatever the precise details of the mechanism, it appears that such specific physical wing features would provide a basis for sound generation by each wing independently. Given the between-species differences in recordings viewed in waveform, it appears that there may be some variation in the precise details of the sound generation mechanism between species.

We thank Xeno-canto for providing free access to sound recordings and the individuals who have made their own recordings available. We are grateful for assistance with literature references from the BTO Librarian, Carole Showell, and to Dawn Balmer and Ken Smith for comments on an initial draft manuscript.